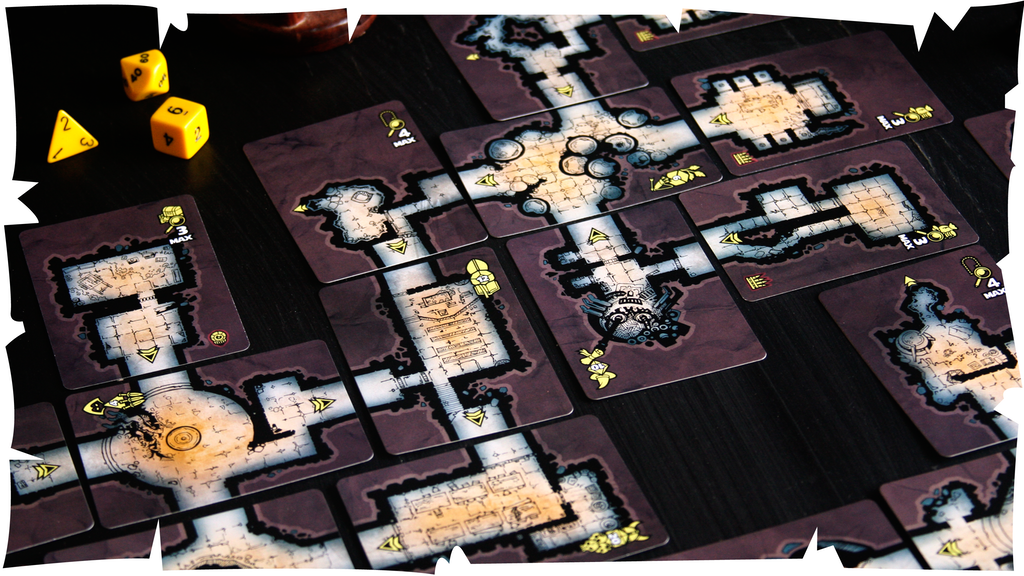 Lost Your Survey?
FAQ: The DUNGENERATOR

What are those icons?

I’m removing all non-essential icons from the prototypes you see pictured before print.

The cards will have an arrow icon on the “South” side, to show the orientation of the card for placement, and an icon designating whether they are an entrance, staircase, dead-end, or special encounter (or none of those). I’m also removing the “secret door” arrows from all but the Secret Passage cards. I’ll also figure out where to add a “room code” that will allow DMs to quickly match up their physical cards with their virtual image files.

The Dungenerator was one mechanic from a cooperative tabletop tower-defense/dungeon-crawler that I pulled off as an accessory. If all goes well, I’ll release the game as a compatible pack in the future!

We’ve done well enough to split production into US and EU/International runs, which will be a bit costlier on my end, but will ensure shipping is as cheap as it can be for backers.

Shipping will be charged via BackerKit after the campaign ends. I’m doing this so that shipping changes between now and then don’t destroy the project, and so I can easily determine how much of each run needs to be made.

The downside of more than one print run is that production and shipping will be separate for each run, so it’s more to coordinate. It’s also likely that fulfillment for one will finish before the other, but I’ll make sure everyone gets their cards!

Digital items will start being delivered in December, so that (even if there are manufacturing or shipping delays) backers giving this as a holiday gift will have something to present!

How are themes for unlocked rewards going to be determined?

What is the GOBLINFINITE Goblin Generator?

It’s a web app that generates nigh-infinite, system-agnostic goblins. The beta and standard version will be released to backers first!

BackerKit is a service that crowdfunded project creators use to keep track of hundreds to tens of thousands of backers—from shipping details, pledge levels, preferences and quantities, whether they have paid or had their card declined, special notes, and everything in between!

The BackerKit software and support team is independent from the campaign’s project team—BackerKit does not handle the actual reward shipping. For more information about the preparation or delivery status of your rewards, please check the project's updates page.

How does BackerKit work?

After the campaign ends, the project creator will send you an email with a unique link to your survey. You can check out a walkthrough of the process here.

I never received my invitation. How do I complete the survey?

The most common reasons for not receiving a survey email is that you may be checking an email inbox different from the email address you used to sign up with Kickstarter, Indiegogo or Tilt Pro account, or it may be caught in your spam filter.

Confirm that the email address you are searching matches the email address tied to your Kickstarter, Indiegogo, or Tilt Pro account. If that doesn’t work, then try checking your spam, junk or promotions folders. You can also search for "backerkit” in your inbox.

To resend the survey to yourself, visit the project page and input the email address associated with your Kickstarter, Indiegogo or Tilt Pro account.

How do I update my shipping address?

When will my order be shipped, charged or locked?

That is handled directly by the project creator. BackerKit functions independently of the project itself, so we do not have control of their physical shipping timeline. If you want to check on the project’s status, we recommend reading over the project's updates page.

I completed the survey, but haven't received my rewards yet. When will they arrive?

As BackerKit does not actually handle any rewards or shipping, the best way to stay updated on the shipping timeline would be to check out the project's updates page.